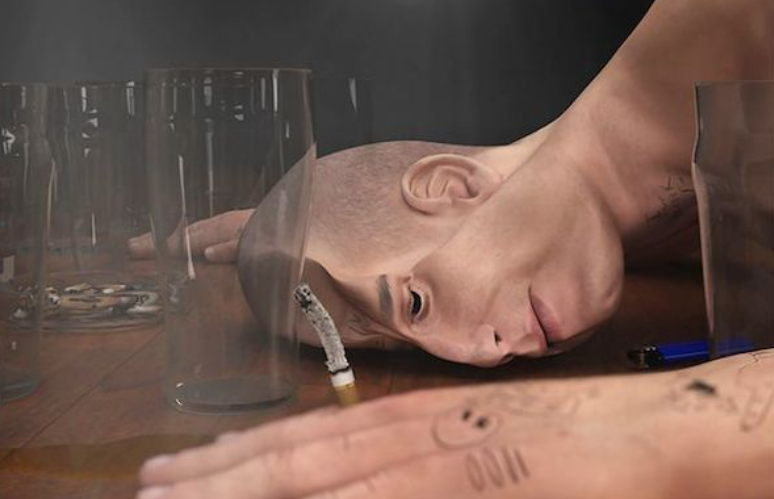 Ed Atkins has captured the move towards artificial intelligence and social media in modern society’s darkly poignant and spiritual reflection. The manufactured image of humanity is one of common vulgarity covered in cheap prison tattoos, noting the vices of the day. Yet, the artificially generated character, as a smoking, drinking skinhead tattooed as a troll, not merely retains all of the worst aspects of humanity; it exhibits a depth of sadness. As such, the character creates an unholy form of an occult videogame.[1]

The definition video introduces an idea of hellish deprivation in the form of empty Sartre-like concepts of a hollow shell of an individual—without character, real narrative, or emotion. The combination of alcohol and cigarettes introduces the concept of violence and obscenity. The film captures the growing social media industry, and how it reduces humanity to the lowest common denominator.

The protagonist in this computer-generated image, Dave, is a straight white male. Such a character represents the stalwart of modern Western capitalist society, whilst also being pathetic and repulsive. Yet, there is a sense of experienced empathy with the character, while the crude and self-serving induces sympathy from the viewer. The CGI creates a fake world representing the commodification of all things, including art and human interaction. The artist has captured the edge of reality and the mirror world of the dataverse. In the animation, we see the avatar of the “everyman”.

Even in a computer realm where pixels should be pristine, we have an image of bodily functions, sex brutality, and dust. The artist creates a paradox of post-modernist technology, capturing the living world in the dead space between pixels. Yet, the artist is and remains unsure of how to describe the work, noting, “I’m not entirely sure how to talk about. It’s a particularly complex and horrible film.[2]” In this piece, Atkins deflates the character (Fig. 1). Throughout the film, the CGI character talks with the voice of a protagonist acting as an anti-hero, pushing mortality to the edge. In it, we see the effects of society as it takes the life out of the hero, portraying the sameness of postmodern consumer capitalism as something that sucks the life and soul out of people (Fig. 2).

The artist is using a white male to portray the nostalgic heart of capitalism as something based on a protagonist who is both pathetic and repulsive yet, at the same time, full of empathy. The character is ironic and self-loathing, and destroys his centre and soul through the process gone through in the film. Here, to find something in the empty environment of what is likely a blue-collar factory life, the average white male drinks and smokes all that is into oblivion. At the same time, the obscene, excessive artificiality of the piece captures the irony between both growth and achievement and those who are forgotten in society.