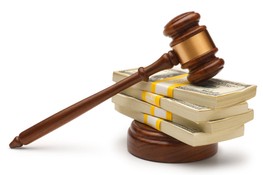 On confirmation, the recipient faces minimal, if any, ongoing risk of fraud from the transferer (Alice, A). There remains an ever diminishing risk of a block re-org resulting in a lost transaction, but after multiple blocks, it becomes a near-zero probability.

Even on a 0-conf transaction, the risk to Bob (B) is minimal as long as B has checked a node (or multiple nodes to be more certain).

Using the API (RPC) call to a Bitcoin node, the merchant can use the call gettxout. If it returns anything, then the output is unspent (at least as reported by that node). If nothing is returned, we know that the output either never existed or has already been spent. In an SPV, where we know the transaction path, and we know it existed, the option is that a transaction has not been spent, or a merchant could have a double spend.

Without explicit collusion from A and a miner, and this is probabilistic at best and not in any miner’s interest, the simple addition of a transaction (TX) into the mempool is good delivery.

The rules of property and the rules of currency differ significantly.

Under the ordinary rules of personal-property (1) transfer, the transferee obtains only the title originally held by the transferer.

So, A cannot give a better title to B than A has in ordinary property law. As a consequence, if a tokenised asset (not currency) is stolen from a party and passed to another, then the receiver cannot receive the full title. In this, if A has property stolen by M, and M (Malicious Mark) passes it to B, then A has a right of recovery from B, even where B received no notice of an adverse claim.

In Bitcoin, a tokenised asset can be linked and registered to a key, but also to the individual’s identity (such as through a PKI-based key registration process).

In this process, A can seek to repudiate a transaction to other parties, and seek redress in court. The international basis of Bitcoin can make this process more difficult and add further complications, but the use of tokenised “sub assets” acts to allow property ledgers, which act using the commodity value of Bitcoin without necessitating the currency use.

Miller v Race (2) was a fundamental decision in the growth of the law of currency (even though it did not involve currency).

In Miller v Race, Bank of England notes (not formally legal tender at the time of the case) where held to operate under the law of money. The result was the owner of a stolen Bank of England note was not able to recover from the party who (innocently without knowledge) received it (in exchange for value). Hence, the recipient maintained good title. This case acts as a foundation for the monetary use of Bitcoin in cash (or currency) exchange for value. A party who has received bitcoin as a consideration for an exchange at value receives good title.

The principle that good title to money is obtained in a transfer of bitcoin even when passed via a thief is now a question as to the nature of the exchange.

As a transfer of currency or private money, Bitcoin is governed by the money rules. When used as a means to record other property, it is covered by the rules for ordinary chattels. See (3).