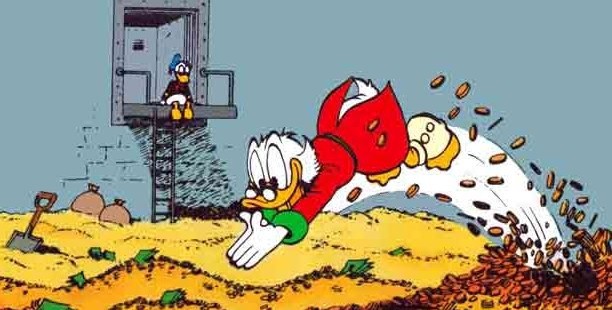 One of the fundamental arguments posed against Bitcoin is that it is deflationary in nature. The misinformed argument made by many prominent government economists is that this will result in hoarding. That is, individuals will irrationally stockpile large amounts of bitcoins as a cash balance.

This is a perfectly common but flawed understanding of money. The entire nature of hoarding as a concept is flawed in itself.

One of the early issues becomes clear when you start to investigate why people hold any cash at all. There is no money circulation as many people falsely suppose, all there is comes from a transfer of commodities. Money in any form is a commodity subject to supply and demand like any other.

Where money itself differs as a commodity is in its use as an exchange medium.

So, what exactly happens when an individual holds a wallet of bitcoins and decides not to spend. Once we called the saving, but let us look at it from the eyes of those who see hoarding. Have we really stopped the economy? For that matter, what is the economy? The simple answer here is that the economy is the sum of human interactions. When we choose to spend money on conspicuous consumption goods now because that aids the economy, we are in fact falling prey to a variation of the “broken window fallacy”. We are consuming capital and not creating it.

Holding a quantity of bitcoins is no different to an investment in land. Yet we do not run around calling land holders hoarders. In holding our money and saving in what we could call delayed gratification we are in fact guiding society and what we call the economy into delivering goods that we want more. In choosing to wait until a better option is available we have decided to tell the producers that create our economy that they are not delivering the goods we require. That is the difference that these people who say we are hoarding fail to comprehend. We vote with our purchases. We decide the structure of society when we spend our money. In saving our money we have delayed expenditure. This is either due to a risk decision where we want to ensure our future well-being and prosperity, or a decision to wait until there is a better option. Neither is hoarding.

If individuals do hold a quantity of bitcoins, what is the effect?

Simply put, the quantity of money in the system being used will determine the value of goods. Remember, like all money bitcoins are simply a commodity. The value of a bitcoin is based on the demand for a bitcoin. This equates to the purchasing power of each bitcoin. If an individual hoards their supply as some would term this but people like myself would call saving, then the result is that the amount of expenditure will change. Those with a desire for goods now will still purchase goods. The argument that deflation of the currency means that people will hold currency is flawed outside of the notion of investment and savings. An individual can choose to put their money into land in the hope that that land will increase in value over time. There is no difference to maintaining a holding of bitcoins. If we save funds, we are putting aside money so that we can consume at a later date or when a better option becomes available.

The argument that hoarding will result fails to take existing reality into account. Right now an individual with excess capital has a choice of spending or investing. This investment can be done at a risk-free rate as it is known in treasury bonds, and money is tied up for a period of time. Individuals are not interested in the amount of money they have. That is a common flaw. They are interested in the purchasing power that they maintain. The amount of Bitcoin in the market will determine the exchange value of those bitcoins and hence the purchasing power.

Having the ability to print more bitcoins does not create wealth.

As we’ve seen, the government’s ability to print money also does not create wealth. The amount of money may change but all this does is change the distribution of goods. Increasing a perception of risk in society results in a different distribution of capital. The uncertainty associated with financial markets is the problem. People should be saving, and people should engage in delayed gratification. The reason they do this should be to create a greater capital base, not to consume for the sake of the arbitrary notion of “economy”. Remember, the economy is nothing but people.

In choosing not to spend now we make a choice that shapes society. Some people say that in saving for something better we are hoarding. I’ll give another analogy. In this I will ask: is it better to go out for a small meal at McDonald’s every night, or to save and go out to a good restaurant a couple of times a month? In both cases we can be spending just as much. What it comes down to is not a question of hoarding, it is one of subjective choice. It is an argument not of hoarding of some individuals saying that others don’t live right. It is an argument of paternalism and telling others how they should live their life.

When an individual saves money, be that bitcoins or dollars, the economy continues. The amount of wealth available is a function of capital goods. If one individual saves them money, then all goods become less expensive for all other individuals. Not only does the saver in delaying gratification hedge their own risk and stop the need to rely on charity, but they also make life easier for those who are consuming at the moment.

When we say we need to have particular sectors protected such as the car industry in Australia, what we’re saying is that the jobs of car workers are far more valuable than other jobs. What we’re saying is these small community interest groups should be favoured over the rest of society. What we’re doing is in fact diminishing the economy. If we stop misallocating funds protecting unwanted services, what we end up doing is helping the market to align to the things people actually desire. Not those things selective individuals tell us we want when we in fact don’t.

The argument of hoarding is one of subjective measures of judgement and risk. It is party A telling party B that their choices are wrong. It comes down to one individual attempting to determine what another should be doing. It is not using valid methods of persuasion but rather attempting to misinform and deceive other individuals into believing that what they are doing is wrong, and what they are being told by another is right. It is not informed persuasion but rather deception.

There is no such thing as hoarding. That is our differences in the risk appetite of individuals. Some of us want to save and not have to rely on government or charitable handouts later in life. To do this we need savings. Rather than conspicuous spending now we seek a delayed gratification where we don’t need to rely on others for charity.

There is a fallacy in Bitcoin, that of the HODL. This is not mere saving but uninformed speculation.

The growth of value in Bitcoin is a Sigmoid S-Curve, it is not exponential.

The issue that is not recognised is that the value is not just in holding, but in use. Spend and replace is use and also allows you to capture and save in Bitcoin (BCH) adding to the value of the system. Unfortunately, this is the key aspect that so many miss. This derives from the use value and the overall velocity of Bitcoin exchange.

The error in the BTC-HODL mentality is that they cannot have use. In Bitcoin, use is by nature on-chain. It is not a gateway protocol (such as Lightning, Plasma, or WormHole) but on-chain use that adds to value.

The use as cash is what will drive value in Bitcoin. Not use in speculation nor “use” as a digital gold. Use as cash. When people start to understand that they need to push for the common deployment of Bitcoin, to use it anywhere they can, to move their savings into Bitcoin and even hold their surplus funds in Bitcoin, and spend and replace and slowly save and use, then and only then does Bitcoin grow us and become saving and not just a HODL fallacy.

Sorry to tell you, but this idea of telling people not to spend ever is wrong. Bitcoin, as the white paper says, is “P2P electronic cash”, and this is opposite to the intent of the system.

We see this is the first line of the Bitcoin paper:
A purely peer-to-peer version of electronic cash would allow online payments to be sent directly from one party to another without going through a financial institution.

The point of Bitcoin is to be used. So, we can say, the point of trying to teach people to ignore the entire premise of a system is a scam.

Bitcoin is Cash. That is, a tokenised P2P electronic cash with the standard ticker symbol BCH.