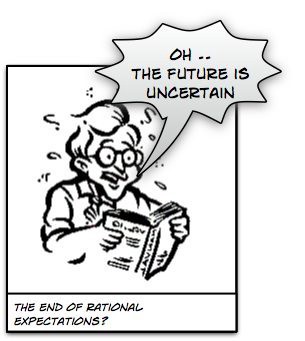 Some are treating the scenario of mining proceedings as a forward memory — remembering what HAS NOT happened.
If you have the system as memoryless, the miners have to have an expectation that they will not find a block in 2 or even 20 seconds.

As a memoryless system, the miner ACTs on rational expectations.
They act seeing that a block is found by another miner, and then see that they will need MORE than 30 mins, as they now have to propagate to miners AFTER a block is found.

So the 33% miner does not see that they can game the system, they do not think, I mine selfishly I can win…
They see an expectation.
They cannot look at the scenario posited, the one when the chain of x blocks is found.
It means looking into an uncertain future and ignoring all the losses, until you get the rare win.

Such is a way technocrats run money.
It is why Bitcoin exists — to remove those technocrats.
The idea of emergence is a religion to Peter and Emin.
They do not see the whole and the system as more than the pieces.
Like many in their academic areas, they see the pieces.
They believe that they can cut all the parts out and see why life exists, why consciousness exists in parts.
Take a brain, cut it up into bits, and go… I found no centre of X.
Peter and Emin act on the measured data. They look at what has already happened, and say: this is irrational. They say that miners could have made more money doing X and not Y.

They do not see that if the scenario was altered, Y would not exist.

They do not see that the miner who gets a block 1 second after another, stops mining on his, and moves to the other is acting rationally.

They say that B would have been better mining on B and then having 2 blocks.

They do not see that if B changed, B would not have the block at T=500.

So think what “pre-consensus” does to the system;
Miners now know what is expected.
They have no rational expectation of waiting. They know.
The uncertainty is removed.

And a certain and an uncertain system are NOT the same thing.

From random chance alone that is IN the system…
You have to account for the fact that miners do not need to monitor.

Remember, nodes stop mining AS SOON AS THEY SEE a block.
It IS how Bitcoin functions.