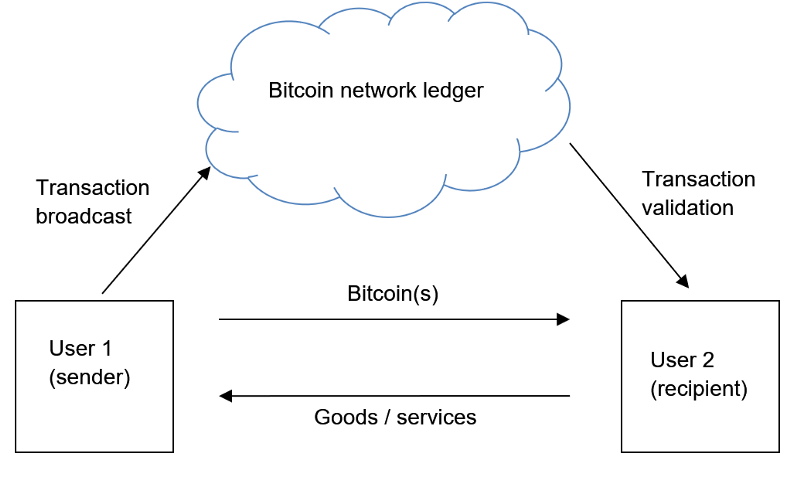 The Bitcoin system may be broken down into the following “phases”:

Each of these phases are discussed in turn below.

“Bitcoin are created and entered into circulation through a process, called mining, that members of the bitcoin network perform. To perform the work of mining, bitcoin miners download free bitcoin software that they use to solve complex equations. These equations serve to verify the validity of bitcoin transactions by grouping several transactions into a block and mathematically proving that the transactions occurred and do not represent double spending of a bitcoin. When a miner’s computer solves an equation, the bitcoin network accepts the block of transactions as valid and creates 25 new bitcoin and awards them to the successful miner.”[1]

“The entire network is used to monitor and verify both the creation of new Bitcoin through mining, and the transfer of Bitcoin between users. A log is collectively maintained of all transactions, with every new transaction broadcast across the Bitcoin network. Participating machines communicate to create and agree on updates to the official log. This process, which is computationally intensive, is in fact the process used to mine Bitcoin…” [2]

Each Bitcoin user has a digital wallet known as a “Bitcoin wallet” which incorporates a public/private key pair.

As such, Bitcoin are “owned” and “held” by the user who has control of the relevant Bitcoin wallet.

The process of transferring a Bitcoin may be summarised as follows:[4]

Only the first two steps involve action by the sender and recipient. The latter two steps are automatically executed by the Bitcoin software and the Bitcoin network.[5]

Importantly, Bitcoin are transferred directly from the sender to the recipient. Bitcoin “miners” validate and update the transaction in the public ledger, but are not payment intermediaries.

A basic Bitcoin transaction may be shown in diagrammatic form as follows:

[1] It should be noted that the rate of creation of 12.5 new Bitcoin is current rate at the time of this paper, and it should be understood that the Bitcoin algorithm is designed to reduce that rate over time (halving approximately every 4 years).