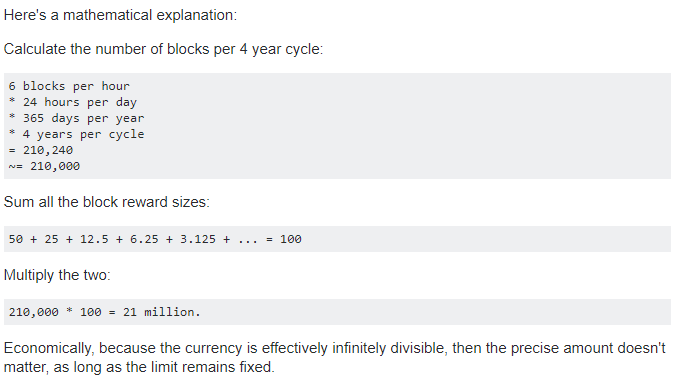 27. Why are there or what do you think is the reason behind 21m coins? Does it reflect the image below, and/or are there any other further meanings or reasons behind 21?

It is a good guess and a cycle that allows a 2 week difficulty adjustment, 144 block daily reward and more. It fits in a 64bit integer and has enough range to be useful.

No real magic, it is a good enough guess.

The use of 10 mins is in the range that would work — this is 7 or 8 to 12 to 13 mins a block. Shorter is too small, longer is too infrequent. A 4-year cycle works well in econometric systems as a medium-term figure. The rest is a good guess. Starting at 50 and halving, well it could have been 60, or 48 but, this is a good guess.

28. Will a USD/FIAT bitcoin cash token be the gateway to encourage adoption?

I doubt it. It may occur, but the reality is, you then have a system where you need to hold USD. Tether is not a pegged coin. It is money creation and in time, the US will stomp on it and stomp hard.

The only, and I mean only way that this works is that a trusted entity does this. This would be a major Federal US bank or as a part of the US Treasury, or why bother?

29. What is the roadmap to reach 5 billion users of Bitcoin Cash?

Building. Others market. I am creating things that will only ever see BCH.

30. When do you think will be the inflection point of the global adoption?

31. In which continent do you think have the first country with a national cryptocurrency, and given the current Venezuela situation what would have been the most practical approach to deploy Bitcoin?

There will not be a national crypto unless it is a token pegged on BCH. There is no long term blockchain other than Bitcoin.

Too many think that you can have lots of blockchains, well, sorry to rain on your parades, but this is not how the system works. One survives, all others end worth nothing.

32. Do you think certain countries will switch and launch their own pure digital currencies, as there was a article in the UK, whereby the Bank of England is considering a digital currency, if so when and will this be on a permissioned private blockchain or can you see it occuring on Bitcoin Cash, via being tokenized?

33. How will be the source code governance when Bitcoin Cash scales?

Software houses will target miners and exchanges, and the best software will win. It will be a distributed software system, this may or may not be microservices based, but each part will be separate.

34. Hashpower — Can you explain from a non-technical view, the role of hashpower and how would you compare or what do you compare it to in order to visualise it?

Miners compete to include and validate blocks.

The role of a PoW system is to make the system stable, it is conservative. Miners choose to get as many transactions into a block as possible, and the fees and other aspects are the result of an emergent process.

35. What are your views on the role and news in regards to ETFs? Do you feel this is a step in the right direction going forward, or will this hinder growth and adoption?

The entire concept that people are seeking to apply is worse than a joke.

Use matters. Forget the HODL crap. For everyone who has spent a Bitcoin, they are adding value. All these who sit and speculate… I have no tears for you, if BTC or anything else hits zero (in the case of BTC — when).

Wealth is about creation of the means of production. It is not about a zero-sum game.

36. In a previous podcast you explained in quite in detail about India and Nehru and the economic state at that time and briefly talked about Spain and their hoarding of gold.

Gold and silver turned Spain into one of the most powerful countries of the entire world in the 15th and 16th centuries. The silver from the Americas aided the Spanish kingdom to finance the wars they used to assure the hegemony of Catholicism in Europe.

The issue was that this expensive policy did nothing to grow the economy. It made no sense as it created no industry nor growth in the economy. In site of the vast quantities of silver (primarily as well as gold) that were delivered into Spain each year, King Philip was forced to declare national bankruptcy on three occurrences within his reign alone. This occurred in 1557, 1575, and 1596.

Gold is not wealth. Goods, productive services and other aspects of consumption and production define wealth. The Spanish kingdom imported vast amounts of goods and services paying for these (and causing massive inflation) with the plundered silver, but this only led to other nations (such as the Dutch) developing at Spain’s cost.

Adam Smith had said “a man’s real wealth came from accumulating capital and investing it”. This was not the mercantilist version of wealth in bullion, but as a direct attack to that flawed idea.

Smith defined wealth as the “annual output of the necessaries, conveniences, and amusements of life”. Spain accumulated and possessed far larger quantities of both gold and silver than Britain (and for that matter the rest of Europe combined), but it was always less wealthy than either Britain or France. It became less wealthy than the Netherlands. We could say that its GDP (not that I like this more modern terminology) was more limited than those of other European powers.

Smith also held that “a man’s revenue came from accumulating capital and investing it” and that came to depend on whether this was applied in using one’s revenue to productive (frugal) or unproductive (prodigal) employments. That is, did the use favour capital investment and growth or direct immediate consumption. A person will grow richer or poorer based on the deployment of one’s money and capital. Prodigality and consumption or even the mercantile idea of wealth as a box full of gold under the bed, was not the route to wealth, it was illusory wealth.

Gold, printed fiat currency, and even BTC as a “store of value” are only a store of future claims on the actual wealth of society, and this is in fact the output of economic resources and investments. When we have fewer resources available from the economy, gold, silver, and BTC will increase in an inflationary spiral to the prices of those remaining resources.

It does not matter whether a country acts to store the output as gold or silver or even BTC, for it always and by nature consumes real resources. The use of energy, consumable products, commodities, food etc act as “the necessaries, conveniences, and amusements of life”. It is the availability of these, and not the amount of gold or BTC that determines the wealth of society.

Look at Singapore. Look at Japan in the 1970’s and 1980’s before the banking disaster they had.

As with the issues about gold (or now BTC) it is the other aspects of society that matter, the production of goods and services. Singapore is wealthy — yet it is a small nation with little in the sense of raw materials. Japan has few commodities and minerals and yet, they are richer now through trade than they were when they tried to take by force.

37. Are you or are any of the nChain related companies working on or collaborating with anyone on a compiler/utility to map higher level languages into script? (if there are specific NDA’s please skip)

Yes, we have patents and PCT applications pending. I cannot cover more outside of an NDA.

38. You mentioned how there were internal tests of 300+GB blocks already, could you provide further updates and where and when may this test data, be released publically?

Investigation of the Potential for Using the Bitcoin Blockchain as the World’s Primary…
Bitcoin has the potential to replace all existing payment systems to become the world’s primary infrastructure for…papers.ssrn.com

In time, but what people need to understand is that we are not a public body, we are corporate. There is no reason for us to share at all. What we do share is purely our decision. There are no obligations and no requirements.

We are developing Terranode and will have this publicly available in time. The lesson that people need to start to come to understand is that Bitcoin is not a socialist community. It is a capitalist system of competition. It is designed to utterly destroy any semblance of group think and collectivism in time.

It is a red queen game, and it is designed to allow the best to gain and for those who do not try to no longer be subsidised. At scale, Bitcoin allows the most productive to keep and reinvest what they have.

It allows tax, but mostly through the standard means with highly productive and efficient companies being able to move and restructure themselves in a manner that allows investment to be excluded from the government coffers.

The consumer is taxed and bears the costs. At the end, all production ends in consumption, so this drives productivity and growth.

That said, the only scaling that matters is miners in competition. The socialist group think around home users needing to run nodes and be a part of a group mentality is utterly sickening.

39. Will nChain ever create a FIAT exchange, as i think there needs to be more Fiat on and exit points, globally? Which exchanges are safe and would you recommend? — CoinBase, Kraken?

It is not what we do.

We are a research and development house.

We work with others (e.g. SBI) to create solutions that are based on our technology. It is just as Microsoft has tools for exchanges and banks, we create IP and software.