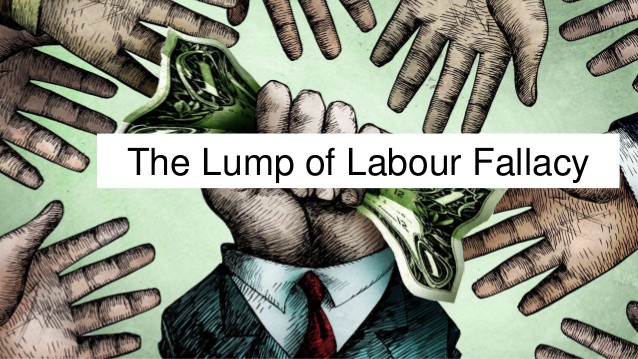 The labour fallacy of mining

I have noted a good number of people hold on to the same common fallacy as was promoted by Marx. Labour is not a goal, it is a means. If labour can be reduced and the level of production increased, it is a good thing. There is an infinite amount of work and hence labour to be distributed. There is and always shall be more labour available than there are people to conduct it. There is no fixed labour pie that needs to be distributed.

The goal is consumption. It is the creation of real wealth; such is products and services that people want. We DO NOT work to work, but rather for what we can obtain. More importantly, we save and invest so we can have more later, that society can fulfil its obligations, and those who save and invest can expect more to be returned in the future.

Yet, it seems to me that many here worship the obstacles over the end. They see increased productivity through advanced technology and processes as a bad thing. Making more work (labour) is simple. Salt the fields and make agriculture far less efficient, become Luddites, and smash the machines. The problem in the equalisation of all people and “fair distribution” of labour is that we end up all being relegated to being equally poor.

Distributing labour just lowers productivity. Yes, there can be more labour, but as there is less output, we all work harder for less, and we all suffer. The fallacy that labour determines value and that there is a fixed amount of work to be done has to end. Such common sophism does nobody any good.

The scaling debate did not start in 2015. It started in 2008 before Bitcoin was even released. I should have realised at the beginning that the people who started to attack Bitcoin would seek to try and undermine everything I was doing. Way back in 2008, James Donald, a closet socialist seeking utopian society with the pretence of being a libertarian, started the attack that I should have realised and seen through at the time.

James wanted an anti-corporate, anti-government solution where every miner is equal, the world has no banks, and the big bad state will be attacking Bitcoin on a daily basis. Never did he think that maybe using it for logistics systems, EDI, payment, voting, and much more, we would have corporations and the state using Bitcoin. Not just as money but as an immutable layer for everything.

James A. Donald and the entire Core/Lightning community failed to understand Bitcoin and, when they did understand it, really decided they hated it. It is why they seek the settlement system they want through Lightning.

We can build a privacy layer on top of this — account money and chaumian money based on bitgold coins, much as the pre 1915 US banking system layered account money and bank notes on top of gold coins, and indeed we have to build a layer on top to bring the transaction cost down to the level that supports agents performing micro-transactions, as needed for bandwidth control, file sharing, and charging non-whitelisted people to send us communications.

The scaling debate, as I said, is nothing new.

The simple answer is that the debate has been between ‘how do we break Bitcoin’ versus Satoshi’s Bitcoin. When I built Bitcoin, I always said that it would be commercial in the end. I’ve been very clear on it the entire time. It is not about decentralisation in some democratised system. That is demagoguery. The aim was to create a stable platform. An evidentiary system that allowed monetary exchange with traceability that acted within the law. I don’t fear a corporation or government takeover on a global system, and nor should anyone who is rational. In particular, the technology acts to ensure accurate reporting and accounting within corporate structures. It incorporates everything that is necessary to ensure that corporations are honest.

It is not a scaling debate, it is a Marxist social utopian debate about this idea of a world without law and government. Bitcoin was launched when it was because of the financial crisis. It did not start and the design was not created because of the crisis. It started years before, because I wanted to find a means of creating a system that would simplify auditing. When I worked at BDO, I took the idea further, and was involved with the development of computer-aided audit tools (CAATs). I was constantly surprised by the level of fraud and corporate misappropriation within every organisation I ever audited. Most issues were very small and added up to be a material amount.

The launch of Bitcoin occurred when it did not as a response to the global financial crisis but as I was offered a golden handshake and could leave in December 2008 and start working on the project in 2009.

So, I really don’t give a rats whether you like me, whether you believe me, or a damn thing for that matter, because I have the force of law. Satoshi is not a socialist shit show; he is a grumpy overworked, overeducated bastard! So get over it, because it’s the best you’re getting. You know what, we have filed 692 patents. And it’s only just beginning, as the results only come to be published years later with the method we are having. In the next five years, I expect to have over 10,000 patents filed.

Such is what Bitcoin is about. It creates global megacorporations. Not little ones like Google, Facebook, Amazon, or Apple. Bitcoin will create corporations that dwarf every organisation in existence in Silicon Valley, and I’m understating.

All of the attacks, all of the people out there who I spoke to and told me time and again how Bitcoin was broken, how their socialist ship shell of an idea didn’t work with it can go stick their heads up their asses. It works, we are scaling it, and I’m patenting more of the system than you will ever understand.

I am sick of people who hate the notion of Bitcoin. It includes people like Hal Finney too. Again, Hal had his head up his ass, and sought something other than Bitcoin. He didn’t want a payment system, he wanted his crypto anarchist shit-show money.

Bitcoin is not high-powered money.

I’m sorry I didn’t stand up for Mike Hearn. He ended up doing the same thing I did in a way because he wasn’t tied to Bitcoin the way I was. He is someone I should have fought for.

Absolute ass hats, Peter Todd and associated and complete and utter idiots really pushed their idea. They talked about the perverse incentives miners had. In the typically Marxist and insidious rhetoric that could have come right out of the book 1984, such guys twisted everything into the idea of decentralisation at all costs.

Here’s the thing: the Bank Secrecy Act means that every single Lightning transaction will need to be recorded on an immutable ledger. You can track and trace every node. Lightning is really easy for doing so. The reason Lightning is so easy to track is that it requires a near 100% up time, and when a system goes down even for seconds, it collapses the whole channel.

I will publicly release methodologies to take down systems like Lightning. I have a better plan: I’m giving them to government.

See here’s the irony in calling me the Bond villain… James Bond works for the government.

Bitcoin is an incentive model. As it is written in the white paper: if a greedy attacker is able to assemble more hash power than all of the honest nodes, the attacker still has to choose between defrauding people or getting paid to validate transactions. It works because the protocol does not change. And it is very specific. The incentive model of a blockchain does not allow a protocol change.

Very simply, any time a new addition is made to the protocol, it splits from the network. All of the old systems, all of the SPV nodes, all of the people using Bitcoin continue on the original protocol. In telling people that they need to update their software so that they have the new protocol, developers are misleading people into switching from Bitcoin to another system. Such is why the 51% attack is not a problem. Even if an attacker gains 51% of the network’s hash power, the best they can do is spend their own transactions or those of whom they are involved with a second time. In doing so, they have also left an immutable evidence trial — which is admissible under law.

The system becomes better incentivised over time. With each halving, the incentive is funded with transaction fees more and more. Consequently, it becomes more and more difficult to attack the system. If a greedy attacker assembles a large amount of hash power, enough to take over 51% of the network, and he seeks to change the protocol, what ends up occurring is that he splits off into a new protocol. Both the old and the new system run simultaneously. The problem, though, for the attacker is that transactions do not go through his system. He needs to mislead users into thinking that the new protocol is Bitcoin. It requires that all users change protocols.

It has nothing to do with running home-user nodes. Only miners run nodes as a node creates a block.

If the merchant detects any double-spend attempt, he will know about it within seconds, and he can detain the person violating the law just as a shop will detain a shoplifter. More importantly, though, there are actually valid reasons to double-spend. But such transactions will not be completed in such a manner as it is clearly illegal.

The effect is that changes to the system such as Segregated Witness in CoreCoin (BTC) create an alternative to Bitcoin. The misleading part of it is that they create an airdrop of the existing network to mislead consumers.