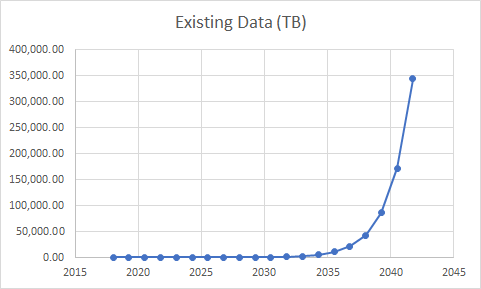 This is a very quick summary of why scaling on-chain works. In 2009, the effective limit in software was 32MB — although this was only due to the limits of the software. For a commercial server, this would not have been an issue. I will address this in the field of a commercial server, and I am sorry, I do not care about Raspberry Pi(e) or laptop nodes.

To begin, the reason many think Bitcoin cannot scale on-chain is that the data will grow exponentially. This ignores the fact that the amount of available storage scales faster than Moore’s law and as a consequence.

Or in a more detailed view, we see the growth of storage below taken only to 2030. Here we see that to scale Bitcoin aggressively we will need to have 500 TB as the blockchain storage by 2030.

This is why some erroneously say that Bitcoin cannot scale.

To them I propose we aim for AT LEAST the following scaling path.

This is an aggressive block increase. We remove the cap and aim to allow all the data we can fit on the BCH blockchain. This is a push to use and an exponential average block-use increase.

It seems mad and huge, until you start to model it against the growth that happens in hardware already. If we take the fact that storage per USD has been doubling every 15 months, we see that in 2009 terms we should be at 8GB as an accepted block-size limit (if there was a limit, and that is something I think should not exist).

My scaling plan would be to push for the size of the blockchain noted above, but when you look at this in 2009 terms, you see a different picture.

This is the fallacy that Bitcoin does not scale.

If we start now with more hard-drive storage than we require (and this is minimal), we scale in a manner that converges to allow 50% spare storage at the same costs.

We take the following as our table of growth (where each period is the doubling time of 15 months):

The reality is that scaling on-chain is much simpler than anyone likes to admit. There is nothing special to be done in order to achieve this, it is just allowing commercial systems to compete and to remove the false idea that home use and hobby nodes need to be subsidised.