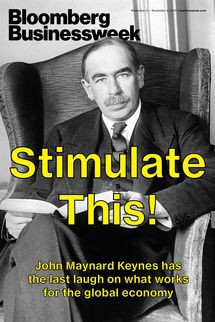 Now, it is generally taken [1] by rational economists without an agenda (and even most of the honest ones with an agenda) that unlike any expenditure being beneficial, that is, it miraculously leads to an increase in the source of “aggregate demand”; that rather than as Lord Keynes promoted in saying any expense is good (in effect even war) that:

“Government spending should be set at the amounts of government goods and services that the public would demand if the economy were at full employment; no make-work projects should be permitted.”

This is the flaw. The assumption is that government can choose better than the market. This is what this entire assumption comes to. It states that a small group of bureaucratic public servants with little access to a real business or market knowledge -limited knowledge — can out decide a market. Any market this is.

This is the flaw. If we are looking at Mr Krugman or any other neo-Keynesian, what they do not want you to know is that they are basing the policy on an idea that central planning works better than a market. That a small group of government employees can at all times beat the combined knowledge of all businesses in the market and that the consumer is wrong when they choose differently.

When you see so called support for aggregate deficit spending by government that is designed to “stimulate the economy” remember that all they have done is spend the future to make things politically better now.

Well, at least we have moved on from thinking that building pyramids and digging and filling holes is productive, but not a long way.

Lord Keynes made a system that was designed to keep Keynes a Lord. Little more.

The answer as to why those such as Mr Krugman loathe Bitcoin is also here. This is as they seek a system that allows them to control and manipulate society. In controlling the money supply, they have power over all our lives. With Bitcoin, these un-elected bureaucrats lose much of this ill gained power.

This is also unfortunate as we now see this same thought process trying to subvert Bitcoin Cash, just as it did with Bitcoin Core (AKA SegWit Coin). The key aspect many seek to ignore is that the market is a system where those with “skin in the game” risk what they have to make more. These gains are usually through efficiency improvements, better business processes and scale.

Yet, as with Core, ABC — developers with little to no economic interest in BCH think they know better that the market. It is disappointing to see these Neo-Keyesians infest Bitcoin, but, this is not likely to be the last time this will happen and it is not the first.

That stated, it is the first time that they will be opposed.

What will make Bitcoin a stable and sound money is for it to scale. Those of us invested, that is, “with skin in the game” will not allow Bitcoin to be subverted again. No self professed “Shit Lord” will ever again be allowed to use Bitcoin as a personal play thing and ground to recklessly experiment.

These central planners think that short term “stimulation”, the endless parade of bells and whistles, of digging holes and burying bottles of money for others to locate is how you build demand. We are here to show them they are wrong. Business need, no it craves stability. This is what we will give it. A sound platform, a protocol that scales and a system that the world can use and build on. Not now, but for generations to come.

The market is made of the people in it. In Bitcoin, it is the miners who decide. With respect to BCH, we decide that BCH is Bitcoin and will remain on the path it was designed for. A path that was set in stone in 2009.

Below, we see Amaury Séchet promoting the idea that markets should not be trusted, that a group of developers know best. We will demonstrate just how wrong they are.

See also Neo-Keynsianism and even Monetarism