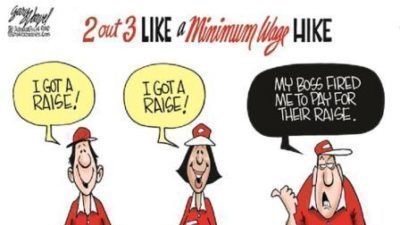 On the Minimum Wage

A minimum-wage scheme is a tariff and price fixing method against people’s labour and ability to sell themselves freely.

The major fallacy in this discussion is one that has occurred not just now, but since the 18th century with philosophers such as M. de Saint-Cricq stating fallacies such as “Labour constitutes the wealth of the people.” These fallacies led to the refutation by Claude F. Bastiat of the “broken window fallacy”, but still managed to persist.

The error is that we see the imposition of a minimum wage whilst still maintaining the status quo, equilibrium if you will.

This is a fallacy that must be countered.

An employer does not seek to exploit in the Marxist vein, rather to maximise one’s profit. This is best achieved through enhanced productivity, not through lowered wages. Where an employer can bring into play the services of another, that employer will purchase them if and only when s/he expects to be able to do so at a profit, for to do so at a loss is to create a diminished capital base, and reduce the basis for further investment.

The imposition of a minimum wage does nothing to raise wages; rather, it imposes an arbitrary floor under which any individual willing to work for an amount under that arbitrarily imposed rate cannot work.

It means that a person who could earn a minimal wage can no longer earn any wage legally.

Those who had been employed under the preceding conditions were employed as they could provide services to the capital enterprise productively for the skills and ability that they have. A minimum wage does nothing to increase this low level of productivity, and hence that person is unemployed as a result of the imposition of the wage minima.

This does nothing to stop poverty; in fact, the increase of those now unable to work for any allowed wage means an increase in poverty.

The means of making more people valuable at a higher wage is to increase their productivity.

The comment that you could “evenly distribute production throughout the globe” completely ignores the issue of productivity. Production would be more centralised. If all countries had the same minimum wage, then those with the best capital equipment and hence productivity would draw all work into them, as they would have an imposed near monopoly on production at a suitable price.

The migration of capital away from those nations with lower levels of capital investment and hence productivity would create a greater divide and concentration of wealth.

A fallacy here is that the poor nations are being exploited such as with the mercantilist system of centuries back. This is quantitatively false. Wealth is created, the natural state is destitution, it is enhanced productivity that has allowed us to escape scarcity and not the exploitation of developing nations.

A minimum wage is simply the imposition of a price floor. A wage floor hits workers with limited skills, primarily young people in developed nations and correspondingly those in developing nations.

The political demand for the minimum wage does not come from low-wage workers. It comes from those who seek to impose controls on them to “better their lives” without looking to the consequences of their actions.

Good intentions, bad results, and the road to hell for those who can no longer find employment.

Henry Hazlitt put it best in his laconic quote:

You cannot make a man worth a given amount by making it illegal for anyone to offer him less. You merely deprive him of the right to earn the amount that his abilities and situation would permit him to earn, while you deprive the community even of the moderate services that he is capable of rendering. In brief, for a low wage you substitute unemployment. You do harm all around, with no comparable compensation.[1]

There is a net loss to society in any such price floor. These include:
(1) the loss of employment to the individual effected from the imposed restrictions,
(2) the dwindling of the economic pie by the loss of productive contribution from those no longer to work productively due to an imposed price floor,
(3) the financial loss to society in supporting those now unable to sell their labour at any legal rate, and the imposed idleness this results in (unemployment, welfare, etc.),
(4) the monetary loss in funding inadequate job training programs and other government efforts to make these people more productive and hence employable at a higher rate, and
(5) the net loss to society that is a consequence of higher consumer prices that naturally come as a consequence of increased labour costs associated with the wage floor.

In this, a loss of market share to foreign competition is likely to occur, most likely in those countries, once again, with lower capital investment, that is those countries who can afford this the least.

Mandated minimum wages are one of the best methods available to price one’s competition out of the market. Historically, minimum-wage laws have been used as one of the most devastating tools in the racist’s toolbox. This is not to suggest that this is the intention of any person on this list, but the objectives that have led to the adoption of a policy often had no relevance and relation to the effects of that policy.

One of the more insidious effects of minimum wages is that it lowers the cost of racial discrimination; in fact, minimum wage laws are one of the most effective tools in the arsenals of racists everywhere, as demonstrated by just a couple of examples. During South Africa’s apartheid era, its racist unions were the major supporters of minimum wages for blacks. South Africa’s Wage Board said, “The method would be to fix a minimum rate for an occupation or craft so high that no Native would likely be employed.” In the U.S., in the aftermath of a strike by the Brotherhood of Locomotive Firemen, when the arbitration board decreed that blacks and whites were to be paid equal wages, the white unionists expressed their delight saying, “If this course of action is followed by the company and the incentive for employing the Negro thus removed, the strike will not have been in vain.

In the US, for instance, it is the minority groups that suffer most from wage controls. Those with the least education and opportunity are the ones who suffer most from these prescriptions.