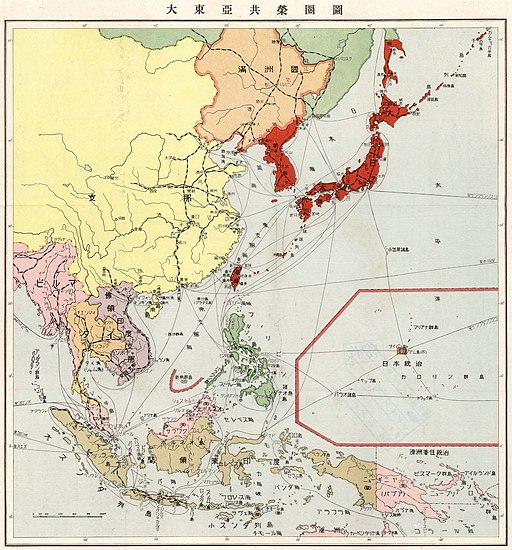 Gordon (2019) documents many of the changes that have occurred throughout the history of Japan, including the development of Pan-Asianism from 1931 to 1941. Alongside the establishment of the Greater East Asian Co-Prosperity Sphere, we can see the integration of Western imperial concepts into Japanese government and systems.

The notion of Pan-Asianism developed as a reaction to the modern Western ideas that had changed Japan from the start of the Meiji and until the problems of the great depression. The start of Japanese Asianism developed as Japan sought to find solidarity with other Asian countries, all of which were under pressure from European nations who sought to expand into the Asian continent.

Tokichi Tarui sought to create a union between Japan and Korea that would enable the development of a defensive front against European occupation. Such forms of local nationalism and pan-nationalism brought on more weight after the defeat of the Russian Navy in the Russo-Japanese War (1905). The control of China and the fragmentation of other Asian nations, including Indochina, or, as it is now, Vietnam and other countries, led Asian leaders to look for local support.

Tōten Miyazaki sought a Chinese revolution and the possible integration with Imperial Japan. Okakura Kakuzō argued that the Asian peoples showed solidarity in the aesthetic aspects of life, including beauty. As a result, they created the movement of “Asia is one”, acting against the encroaching European civilisation. Okakura saw that Asia had a past consisting of three countries: Japan, China, and India. At the same time, of course, the major Asian countries were seeking to engulf the smaller Asian powers in an imperialist manner.

The concept of the New Order in East Asia started with a geographically smaller region, that Japan could control. It followed the concepts aligned with those promoted by intellectuals such as Okakura. To this end, some of the Japanese leaders sought to promote harmony between Japanese, Chinese, and Manchu peoples—under Japanese leadership, of course. The original concept was associated with the liberation of Asia from European colonial powers. With the development of Japanese industry in the 1930s following the great depression, some people started to see that it could also be a path to gaining resources that would propel Japan into a modern powerful nation.

The militarist groups of the Japanese government saw that the supply of raw materials could be used to wage war and expand the Japanese Empire. It expanded in the 1942 Great East Asia movement, where Japan, Manchuria, and China were all to be integrated for the co-prosperity of Asian countries that would be free from Western colonialism and white men. The economic aspect was built on the locking of the pound sterling and the introduction of a “yen block” that would promote Japanese trade in the region, including Taiwan, Korea, and Manchuria.

The concept extended in 1943 following the Greater East Asia Conference. The heads of the Greater East Asia Co-Prosperity Sphere had previously attended a meeting known as the Tokyo Conference, which was ironically held in English, as the different leaders did not want to choose one language from the Asian region over the others. Dignitaries from Japan, Manchuria, China, Burma, India, the Philippines, and Thailand had attended the conference with the goal of liberating Asia from Western colonialism and expelling the white man from their region.

The group of countries issued a joint declaration promoting economic freedom and political cooperation, to allow them to act against the allied countries. They noted that the West was materialistic and did not understand the aesthetics of the Asian mind. The Philippines was seen by Japan as a way of feeding the army, and a source of agricultural products needed by its industrial expansion. In addition, instead of oil, which the Asian region lacked, the Japanese people tried making ethanol and biofuels from sugar cane and castor beans in the area.

The surrender of Japan in 1945 saw the collapse of the co-prosperity sphere. Many Asian leaders, such as the president of Burma, blamed the Japanese military, and the militaristic attitude that had developed in Japan during the 1930s and early 1940s, and the attempt to form an Asian Confederation for the collapse of the region. Other nations saw that the Japanese role was not one for the betterment of Asian countries but rather for the betterment of Japan. As a result, the Japanese government and people failed to gain the support of the Asian countries they needed, and the nationalist movement in those countries failed to develop a unity of interest between Japan and their own people.

It was the failure of Japan to understand the goals and interests of the other peoples, in the same way that the European colonialist had failed to understand Japan, that led to the collapse of this effort. If the Japanese people had not embraced an authoritarian government and had sought to truly make Asia for Asiatic peoples, not Asia for Japan, the development of a pan-Asian government may have occurred.