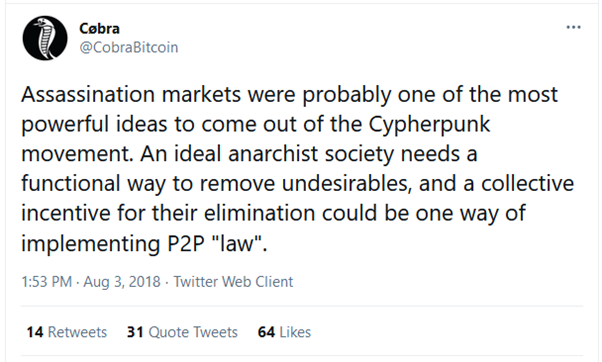 A major fallacy of the anarchist idea that we can create a free society using assassination markets derives from transaction costs and differences in the ability to coordinate and liquidate money. An individual with copious amounts of wealth can, first of all, hire protection. Such a society does not become good; it merely becomes a free-for-all that degrades. People hide in fear, and an environment of fear does not bring about innovation or growth.

The question it begs is, who are undesirables? Those who are wealthy have an income and free capital. The poor do not. If you take one million people in poverty and realise that it is unlikely that they will even be able to scrape up a few dollars each, it becomes difficult to see how a majority can have a say. The richest 1% in such a society would be able to decide to remove all the undesirables at will.

Imagine a society of ten billionaires and one million people earning an average of US$20,000 a year. The savings of the million individuals would not offset the actions of even one billionaire. If there are homeless people in a society, the movement would have them killed.

Humans are not hive creatures. Whenever there are revolutions or changes in power, there are leaders who incite and change the course of history. Even though it is popular to claim the will of the masses, without leadership, no movement survives. Consequently, the leaders of a movement could easily be the targets. Here, a wealthy dictator will always maintain control. If an assassination market was constructed, it would not favour the will of the people but a system of ‘might makes right’.

The will of the people is not concrete, and there is no one individual group that feels the same way across all subjects. An assassination market is a system without freedom. It creates a Machiavellian society where individuals control the larger population through fear and secrecy. Such a system is closed, and in a closed system, leaders become like Stalin, allowing others to steal and redistribute.

Who decides what is undesirable?

In the 1930s, Hitler came to power based on the decisions of the majority. The majority is not always correct. And, the individual arguing for the sanctity of human life becomes a target in such a system.