Home » Law & Regulation » The Evolution of the Constitution 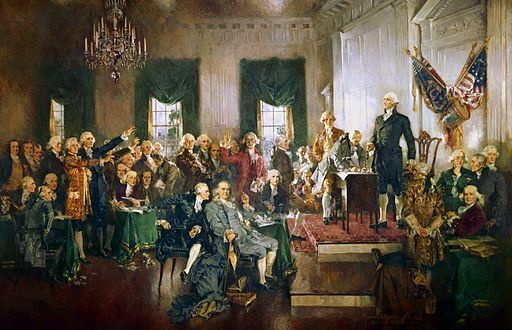 Gordon Wood has provided an excellent history of the early birth of the Republic [1]. Wood introduces the changes that occurred within the United States by using Washington Irving’s short story ‘Rip Van Winkle’. In demonstrating the changes that had occurred in just one generation, Irving’s story is a rather cogent tale. Irving noted “that the character of the very people seemed changed. There was a busy, bustling and disputatious tone about it, instead of the accustomed phlegm and drowsy tranquillity.” [2] To many, it seems as though the United States was merely intrinsically involved. Still, the true nature of the changes that had occurred had been incredibly and radically altering society as a whole. The same thing can be seen in the differences in US foreign policy as the country moved from the Articles of Confederation to the US Constitution.

In a paper by Robert Clinton, we can see the history of adopting the Constitution of the United States following the earlier Articles [3]. The evolution of the Constitution occurred gradually between 1776 and 1789 [4]. Over the same period, we see the foreign policy of the United States maturing as it moves from a system without a formal written constitution towards the Articles of Confederation (1781) and, finally, the draft of the Constitution (1787). The development in such a short period of time demonstrates the attitude held by Irving. It was a radically changing world. The nature of sovereignty was fluctuating and unfixed, so even a concept of foreign affairs could not easily be determined over the short period.

Before the formation of the principles of government defined under the Constitution, some would argue, as Clinton noted, that sovereignty was going to mean a single sovereign nation, with the states only providing administrative support [5]. In the early Continental Congress, debates resulted in a lot of discord. Some sought a loose confederation of states, one that was very different from the notion of a centralised executive authority. Article IX of the Articles of Confederation provided the Congress with the sole and exclusive power to make war and peace [6]. As James Madison noted in Federalist No. 42, the regulation of commerce is unfettered with the Indian tribes and within certain trade with the surrounding nations. At this point, Article IX imposed import duties on foreigners and granted the right and power of entering into treaties and alliances. The document left a failure in the ability of Congress to regulate interstate commerce.

A difficulty that arose because of the lack of interstate commercial control by the Congressional assembly is associated with the interactions between Great Britain and the various states. Britain understood the distinctions between trade policies in the states. By discriminating against American vessels in British ports and imposing different regulations and bounties across different vessels that made the interpretations of regulations more onerous, Britain used such differences to exploit American trade [7]. Mayo provides early primary evidence of many of the difficulties faced in raising money to pay for the forces needed for military operations [8]. One of the primary difficulties that occurred involved the dissension between states over issues that had a federal impact.

The 1781 Congress sought a partial remedy that would cover some of the financial problems and aid in a universal foreign policy. Yet, Rhode Island refused to consent, and blocked the amendment using its veto [9].

The early Congressional Congress formed Committees on Foreign Affairs, a Board of War, and other divisions that started to form the early permanent executive departments within the Congress. The difficulty remained where under Article IX, the various states had to implement the rules, and there was insufficient power under the Confederate government. The early government under the Articles lacked a separate executive branch, and did not have separate judicial authority. Consequently, it was reliant on the state courts for the enforcement of federal law and policy [10].

The Madisonian form of republicanism adopted with the Constitution allowed the federal government to implement many of the same policies that they had sought before 1787, without continuing vetoes from the states.

One aspect that would change lay in the nature of the statecraft. In an analysis of the work of Thomas Jefferson, it is possible to see how the foreign policy of the Congressional assembly differed from one of the United States after the adoption of the Constitution [11]. Prior to the ratification of the Constitution, the foreign policy of the Confederate states relied heavily upon the individual charisma and statecraft of people such as Jefferson.

Another interesting way of looking at the differences is to investigate the surrounding nations and states. Haas looked at the interaction between plantation owners and slaves in the face of the Spanish regulation of slavery in Louisiana, in the period up to 1803 [12]. An analysis of the history of Louisiana and the interactions with the United States at the time and following the implementation of the Congressional powers shows how trade and government interactions varied. Looking at the trade rules that were reported at the time, it becomes clear that the interactions with Indian nations and areas next to the United States, but not part of the United States at the time, before and after the signing of the Constitution were very different [13]. In documenting the history of Louisiana, Martin noted the differences in how United States agents had been viewed compared to the Spanish planters noted by Din [14].

The analysis by Dougherty of what he terms ‘collective action’ under the Articles shows the plans implemented by Ben Franklin that he hoped would form an American Confederation under a creative partnership [15]. Unfortunately, without the ability to raise money to fund the Federal government, implementing many of the policies became unfeasible. Hamilton can be demonstrated to have implemented ideas that were consistent with the modern theory of public goods [16]. Hamilton and other Federalists understood that a stronger central government could be created through the Constitution, whereby the weak institutional arrangements that had allowed government policy to be vetoed, which was the case under the Articles, would no longer be an ongoing problem.

8. Mayo, Robert. (1852). Army and Navy Pension Laws and Bounty Land Laws of the United States Including Sundry Resolutions of Congress, from 1776 to 1852: Executed at the Department of the Interior. With an Appendix, Containing the Opinions of Attorneys General of the US, with the Decisions, Rules, and Regulations Adopted by Different Secretaries, Relative to the Execution of those Laws. Compiled by R. Mayo and F. Moulton. p. VIII.

[Image: Scene at the Signing of the Constitution of the United States, Howard Chandler Christy, Public domain, Wikimedia Commons]