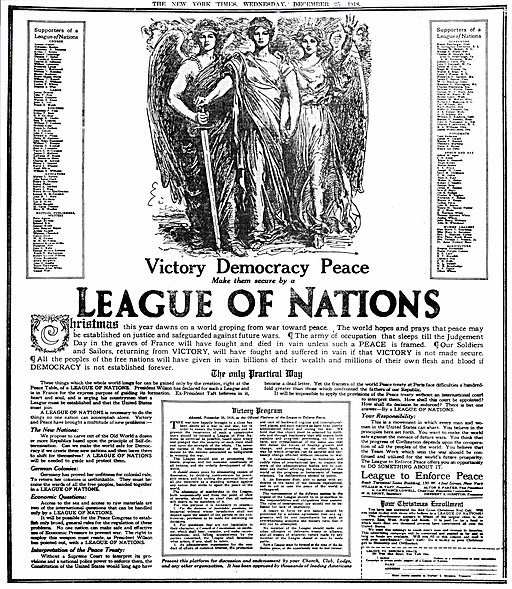 Tucker (2007, p. 4) explains how both the circumstances of the American position and the nation’s political views and outlook changed drastically in the period between 1812 and 1914. Up until 1914, the political outlook had remained decidedly isolationist, but equally, towards the start of the 20th century, people in the United States were becoming more and more aware of their increasing power and strategic positioning compared to Europe. Likewise, Wilson was an idealist who saw the role of America as one that had been established to “vindicate the rights of man” (Tucker, 2007, p. 4).

Throughout the course of the war, Wilson changed his position, recognising that the European War was more than a mere regional conflict. Wilson sought to avert the uncontrollable chaos and implement an orderly change in the modern world (Ambrosius, 2002, p. 31-2)—as the global nature of the European War became more apparent. As empires throughout Asia, Africa, and the Americas were drawn into the war, Wilson started to note the effects of global anarchy brought about through conflict. He envisioned interdependence across the world, with an alliance led through democratic reform and the implementation of technology. When Wilson entered the White House in 1913, the industrial technologies that the United States commanded provided opportunities that would allow the United States to emerge as a world power.

Ambrosius (2002, p. 32) documented how the economic supremacy over Spain had translated into military victory, allowing the United States to control Cuba, Porto Rico, Guam, and the Philippines. Knock (2019, p. 104) demonstrated how it would be misleading to betray Wilson as a solitary individual making decisions for the world. While Wilson was indebted to many British radicals, including Fabians (McBriar, 1962, p. 145), Wilson was at heart an impassioned proponent of the American progressive internationalist movement. He thought of an Americanised version of social democracy that could be exported to the world. When the United States finally entered the war in 1917, the progressive internationalist movement had already helped the presidency come to terms with the fact that the opponents of domestic reform and the balance of power were related entities.

In documenting such new internationalism, Dawley (2013, p. 13-28) looked at the increasing interdependence of nations and the growth in global trade and how it had brought goods and products and ideas that would result in the radical changes throughout the 20th century. In Wilson’s defence, many of the policies attributed to him, such as self-determination, were demonstrated to be myths that started later than his presidency (Throntveit, 2011). The entry of the United States into the global arena mirrored Wilson’s goal of creating an egalitarian League of Nations dedicated to democracy.

Many of the difficulties of the changes Wilson sought to implement stemmed from his inability to promote his ideas and maintain support for them. Wilson was an academic (Bragdon, 1967) who failed to see realpolitik and believed in an idealistic version of the world. As Dawley (2013, p. 35) demonstrated, most nations had been on a path towards an international economic entanglement that surprised most people when the world collapsed into a state of anarchy and war. Yet, more minor wars had occurred involving both the United States and Eastern European countries on and off in the decades preceding World War I.

I see the need for order, as did Wilson. Yet, I am more pragmatic and conservative in my views. Wilson wanted to bring about a system of social democracy. Not all nations and cultures are suited for democracy. They would need to be educated over generations to be able to change and interact peacefully in the long term. As Hashemi (2003) noted, Mohammed had created a system that would be religious and incorporate the secular foundations of an Islamic empire into his teaching. Unlike Christianity, the Islamic religions embrace a system of control that De Tocqueville (2001) saw as one of naturally forming authoritarian governments rather than democracies. Kelly (1995) analysed the works of de Tocqueville, noting that democracy requires a specific type of religion, or it can devolve into demagoguery and tyranny. Whilst authors such as Amhad (2016) would argue that a particular form of democracy can arise in Islamic states, I don’t find the argument compelling. And the historical positions of Islamic nations do not support such arguments.

Consequently, I see Wilson’s ideology as worthwhile, but his lack of pragmatism is very problematic. While it may be laudable to seek global peace, peace is selling the future for little return at all costs. Biggar (2015) provides a far superior argument, in opposition to the virus of wishful thinking, and returns the position demonstrating that hegemonic powers such as the United States need to use their position and strength to ensure order and stop global anarchy. Here, it becomes necessary to consider that military action can be justified and that the ends that result will only come through intervention.

Ahmad, I. (2016). Democracy and Islam. In Toward New Democratic Imaginaries-İstanbul Seminars on Islam, Culture and Politics (pp. 125-136). Springer, Cham.