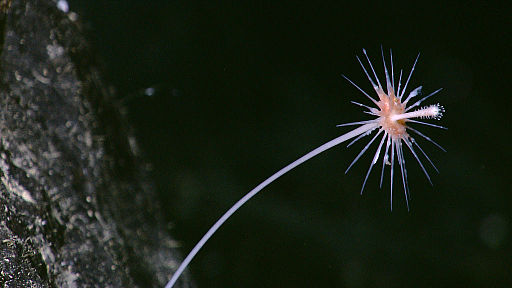 A relatively recent paper from O’Hara et al. (2020), describing a scientific survey of the lower bathyal and abyssal seafloor fauna of eastern Australia, has discovered multiple new species. In this recent exploration, seventeen new species of carnivorous sponges, belonging to seven of the nine identified genera of Cladorhizidae, including Abyssocladia, Asbestopluma, Chondrocladia, Cladorhiza, Lycopodina, and Euchelipluma (Ekins et al. 2020), have been discovered. Cladorhizidae are a family of carnivorous demosponges (Class Demospongiae) that feed on ocean-dwelling crustaceans and small invertebrates. The group of creatures is known to have a long lifespan (500–1000 years), and presents the most diverse class in the phylum Porifera. Such deeply rooted sea sponges are most commonly located on oceanic ridges and seamount systems.

The most surprising aspect of the find was that over forty specimens were recovered, with several species being only several millimetres in length. This group of carnivorous sponges was the most commonly collected family in the expedition. Many of the demospongiae collected in the expedition could not be identified as describing species, whereby twenty-two operational taxonomic units (OTUs) have been remarked to be new to science.

Creatures of Class Demospongiae of the most prolific form fall within the phylum Porifera. They include species of sponges with a soft body covering a hard skeletal mass made of calcium carbonate and associated mineral compounds from either aragonite or calcite. As with the majority of the class, the newly discovered specimens are leuconoid in structure, with a combination of mineral silica and protein spongin forming fibres that differ in form from the glass sponges.

The simple collection of sponges comes from the abysmal depths where there is a 150-fold increase in the amount of silicon in the water. Many such creatures take the form of glass sponges to create large silicon structures, whereas others, such as the ones described in this review, have adapted and become a carnivore, in an attempt to more reliably source food at ocean depths. Some of the species found had been discovered in prior studies of abysmal depths, but more than half of the sponge specimens collected have never been seen before. The authors of the paper note that over three quarters of the species collected are new. Many of the same sponges collected from the abysmal plain and continental slopes had not been fully described.

Such discoveries demonstrate that the Cladorhizidae family of demosponges is incredibly diverse, and further investigation would likely find even more examples of previously unknown species. Interestingly, such carnivorous sponges have developed the ability to capture small crustaceans and prey using filaments or hooks. Such creatures have only been known to science since 1995, but the extended research that has been done since then has uncovered many more species of such alien-looking creatures, quite often appearing to come from another world.

With most of the ocean bottom still largely being left unexplored, it remains unknown as to how many new species will be discovered, or even how many more different forms of carnivorous sponges exist.

Folkers, M., & Rombouts, T. (2020). Sponges Revealed: A Synthesis of Their Overlooked Ecological Functions Within Aquatic Ecosystems. YOUMARES 9-The Oceans: Our Research, Our Future, 181.