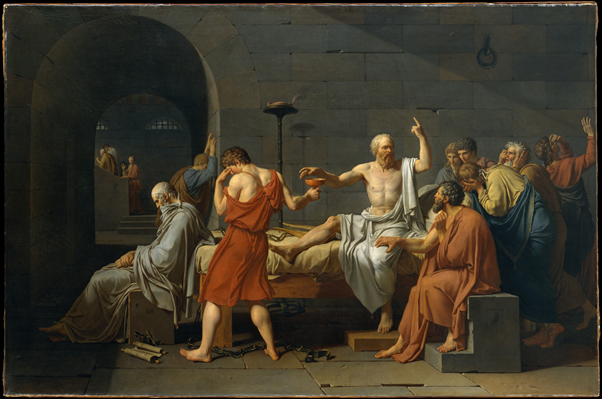 Art academies were principally constructed to instruct and train young artists with a set of codes and foundational principles. Artists would emulate contemporary forms. In some ways, such principles emulated academic scholastic forms that sought to perfect existing styles and that avoided innovation. Art looked back, and attempted to capture the classics. An artist would provide homage to the greats that preceded them, whilst seeking to elevate their art. It was a system of tradition and conservatism. Following Galileo and Newton, such artists discovered a God-sized hole in the transcendent. They sought beauty in the landscape and the classical ideals of the past. They filled the place of God with past heroes and an emergent otherworldliness that embraced nature.

The primary forms advanced by the academies included historical painting, portraiture, landscapes, and still life. We see multiple themes displayed in Jacques-Louis David’s Oath of the Horatii (1784). The painting depicts a classical Roman legend concerning a dispute between two warring cities, Rome and Alba Longa. In paying homage to Livy (sections 24 to 26), David creates a unique scene depicting the oath to protect Rome made by three brothers. The painting captures the necessity of duty over personal feelings and concerns, which we see in the limitation of the women and children who will be left behind. The scene was not referenced in any of the existing and remaining Roman texts, but has rather been interpreted as part of the classical story by David (Winkler, 2009).

In it, we see the homage to the strengthening of duty, and the necessity to sacrifice, that was promoted as a civic duty. The brothers are stern and stoic. The women, although saddened and melancholy, are not weeping to console each other. We see the Enlightenment adherence to the past, captured and promoted as a means to educate what remained a mostly illiterate population.

The Departure from the Academies in the Eighteenth Century

The departure from the classics and the fixed path of the academies allowed the artist to explore and innovate with a greater depth. In a move towards the modern, Joseph Wright used dramatic lighting effects to capture modern industry. An Iron Forge (1772) captured contemporary industrial life while juxtaposing the classical images of his forebears. The painting involves a scene that parodies one of earlier religious iconicity, capturing the nativity scene in the birth of the industrial.

In its spectacle, the iron founder is impossibly close to the forge, displaying pride at the birth of the iron slug. The use of a water-powered hammer is not new, and presents an ironic tieback to the classical systems of Rome (Long, 2008). Such water-powered hammers date back over 2000 years, linking the classical to the modern. When we look closely at the image, we see that the hammer is powered by a wooden wheel, and not the industrial steam-powered iron turbine. Yet, Wright discards the high-minded theories of the academies—in delivering a prosaic scene of proletariat effort. Such images were considered undignified by those trained in the techniques of the academies. Yet, the lighting effects and vivid composition deployed in the scene demonstrate a sublimely devout grandeur. The enlightened view of the everyday depicts the age of man; not in the reflection on classical gods, but in the humble origins of everyday life.

At the same time, such artists have moved away from the transcendental and into displaying the heroic aspects of life. It is finding beauty in an everyday scene. It is taking the commonplace and not, as with modern art, making it an object of obscenity, seeking parity with beauty, but rather finding the sublime and the ethereal in the ordinary.

Contrasting Ideas through the Changes in the Eighteenth Century

One of the best ways to understand the changes in how people thought and how art diverged across the eighteenth century is to look at the transformation in art. The divergence is particularly contrasted in two death scenes, one depicted by David (1787) and the other by Delacroix (1827). Whereas the scene depicted by David is ordered in a linear arrangement with those listening to the last words of Socrates in the foreground, as his family leaves the cell in the background, the scene depicted by Delacroix is chaotic: it represents pandemonium, whilst the potentate sits with composure amongst the carnage.

David (1787) depicted the death scene of Socrates. Socrates was condemned for a belief in an idealised and absolute truth. He could have defended himself, but instead used the opportunity to promote his ideology, knowing where things would lead. Socrates could have accepted exile, but instead chose to become a martyr to truth. In some ways, it is analogous to the sacrifice of Christ, who could have easily avoided his fate, but chose to stay true to his beliefs no matter the cost. Socrates never wrote, but he was said to recall a dream when the gods had told him to make music, and in the picture, we see the lyre on Socrates’s bed while he continues to teach even as his disciple hands him a cup of hemlock. The painting was commissioned by the Paris Parliament, and was an advancement of neoclassicism. The artist poses Socrates through grand theatrical gestures that capture the humanist beauty in a reaction against the Rococo.

The Death of Socrates (1787) contrasts greatly to The Death of Sardanapalus (1827, Musée du Louvre, Paris). Both are deathbed scenes, yet The Death of Socrates shows the heroic, whilst The Death of Sardanapalus concentrates on the suicide of an ancient Babylonian potentate, acting in despair. Socrates martyrs himself to truth, whereas Sardanapalus provides a scene of violence and carnage in what would now be construed as an active murder-suicide. Delacroix displays a scene of senseless and gratuitous violence and carnage. Whilst adhering to the rules of classical historical painting, Delacroix seeks to shock the viewer. We see the potentate watching idly, with mild interest, as his harem is slaughtered in front of him.

Whereas David conforms to the humanist ideals, Delacroix starts to move away from classical ideas and into expressing the depravity that has occurred in the world before him. The use of a restrained pallet by David produces a scene without passion. The death is calm, and mirrors the wisdom of Socrates. Conversely, the pallet used by Delacroix is rich, and the crimson of the scene captures the blood that has not been displayed. The scene depicted by Delacroix uses a minimal palette, to express the carnage more fully—while simultaneously capturing the beauty and the horror.