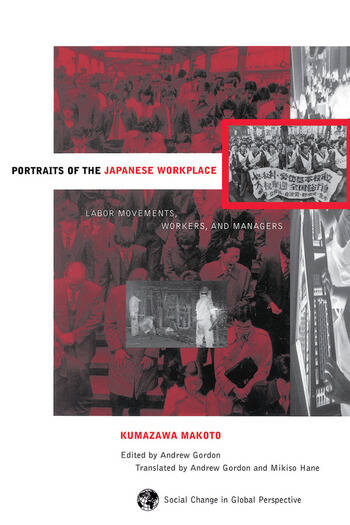 Putting his authentic dilemma more specifically in terms of my particular concerns, is it possible to be an anti-establishment union activist while working as a conscientious loan officer of a major bank?  For twenty years Kawabe searched for an answer to this question… With his contradictory personal characteristics, his life is the very emblem of an ordinary worker’s existence in Japan’s current system.

The quote is from Kumazawa Makoto’s book titled Portraits Of The Japanese Workplace: Labor Movements, Workers, and Managers (1996). In the epilogue to the section on ‘Twenty Years of a Bank Worker’s Life’, Makoto is detailing the life journey of a Japanese bank worker, Kawabe Tomomi. The section covers the later part of his life, including his final years in the job and all his experiences. The last years fall into the period from the mid- to late 1970s. It constrasts heavily with the life of the worker, who is used as a case study and shown to have contradictory ideas. Of note, towards the end of his time at the bank, he becomes a workaholic, because of the heavy demands of his job (236). Towards the end of 1977, Kawabe is finally promoted to assistant superintendent and deputy branch manager, to which he says, “Nonsense!”, in his diary (239).

He notes that it is nonsense because he cannot find an explanation as to why he would be promoted, given that he is ten years behind schedule and a troublesome employee. In 1978, Kawabe ends by resolving to be the ideal “revolutionary proletarian” (240). He does his job, and he even works hard, though he seems to be behind all the time. Yet, it is his family that gives him happiness. His wife is warm and gentle, and his son, still in middle school, enjoys playing tennis and neglecting homework, which in part came about because his father never had time to check on the progress of the children. Their family remains as an extended unit demonstrating a bit of a throwback to the past, with his elderly mother helping in the family as much as she can.

Makiko has a minor heart ailment that needs operations, and she has attacks because of it. Unfortunately, the family is not able to have her gain access to the required medical aid. Kawabe is a man of profound contradictions. He believes deeply in the values of socialism and Marxism, and intellectually thinks that such was the core of his reason for being. He is stuck in a life of student ideas that concern the transformation of the world into a new system that would be equal. He remains a literary youth at heart, while simultaneously becoming a cold cynic and working long hours.

In this case study, we see the work of a standard middle-class male with a fairly typical family. He is ideologically opposed to some of the concepts and capitalist ideas that he has promoted through his meticulous work (241). He is a member of the union in a country that, as Woodward (1992) noted, maintains a strong anti-union sentiment among Japanese investors. In a bank, such an attitude would be expected to be held by its employees (Neary, 2019). Yet, Kawabe (242) would see it as a life staring into the abyss. He exhausts his nerves to the limit (242), by contradictions that allow him to respond to beautiful concepts and words.

Kawabe is a humanist union activist, who lives and dies of the daily struggle of the white-collar worker. In 1980, following his death, many city banks change their practices to lighten the workload of their workers.

Makoto has taken the diary of Kawabe, which remains with his wife, and built a story of a very human man, who documented the troubles he saw with his work and life in the period from 1965 to 1978. The story is particularly useful in understanding the underlying currents of Japanese culture of the time. It is a story told not from the perspective of an elite view of life, but rather by an ordinary person experiencing the effects of a country that sought to grow at a rate that could not be sustained without burning people out.